An elite field of Slags golfers (“Virgil”, “Dork”, “Beneriano”, “Ballesteroids”, “Wanger”, “Julio”, “Big Mac”, “Albert” and “Bernie Steakhouse”) were invited for the event which is known as the toughest in Slags golf.

The duel in the wind

The extreme winds created havoc with most of the field. The conditions were such that only the best Slags golfers could compete.

“Beneriano” started well, despite a triple bogey at the first, and was only 5 over par by the 8th with a one stroke lead. As weather conditions worsened, it was a case of hanging on and eeking out bogeys and doubles.

In the end, golf was the winner as “Beneriano” stayed strong to the end to triumph over “Dork Duval”. The two finished with equal scores with Beneriano winning on count-back, through sheer weight of birdies. “Albert” mopped up valuable ranking points with a third place finish for the first time.

The Open was held in possibly the worst conditions ever seen at a Slags golf event. Winds of 30 knots and higher gusted around the downland course and created havoc in the weak minds of the weaker slag golfers.

In the end, the superior pitching, chipping and putting from Beneriano was the difference.

Greatest choke of all time ? 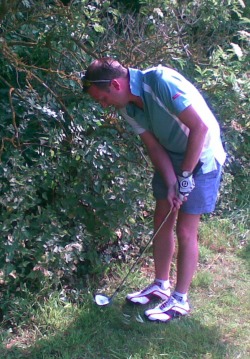 The Open had seemed “Dork”‘s for the taking after going 2 up with 3 to play on the 15th green, but deep down, he knew he wasn’t good enough and eventually found a way to fail.

Dork’s drive on the 16th was a pitiful hook hit 100 yards wide of the fairway and resulted in dropping one stroke. He was now 1 up with 2 to play.

Dork’s 7 iron on the short 17th was pushed into the trees and long grass on the right and feared lost. Amazingly, the ball was found by competitor “Beneriano” in one of the most magnificent displays of Slags sportsmanship ever seen. The hole was tied and it appeared at that point that Dork would hang on despite his blatant choking.

On the 18th, Dork and Beneriano both got their drives away and on the fairway. Beneriano played first and the wind pushed his 6 iron wide of the green on the right, leaving him in deep rough, short sided behind a bunker. Surely not even Dork could fail now.

With absolutely no pressure on him, Dork hoiked an 8 iron massively left of the green. Leaving himself in the rough, with a bunker in front of him but an easy pitch with plenty of run behind the bunker.

Dork faced up to his destiny. A simple little pitch over the bunker and two puts would surely be enough for him to win his first Open.

Sadly for Dork, his pitch was predictably feeble. His trademark shakey leg action on his short game let him down again. His pitch careened over the bunker, green and came to rest on the apron of the green up a side slope.

Even after the appalling pitch, he’d been putting well from off the green all day. Beneriano’s par putt slide past the hole missing by millimetres and he tapped in for bogey.

Dork managed to dribble up a putt to within 3 feet and left himself an easy straight putt to win his first Open. He pulled it wide and the rest is history.

This was a choke of truly monstrous proportions and one wonders about the longer term impact to Dork’s game.